A compendium of golf instruction and ideas.

It’s no secret that most tour pro’s tend to work the club down towards the ball on a more shallow plane than they take it away in the backswing.  Here is some excellent footage and analysis provided by Craig Hanson if you’re unfamiliar with this concept:

But how is this accomplished?  Most amateurs tend to do exactly the opposite.   That is, they pull the club inside too much on the backswing and then steepen the plane on the way back down.  The results in weaker hits with the club head travelling more “out” to “in”.  As an antidote to this pattern David Leadbetter has recently introduced something he calls the “A Swing”.  Essentially he has taken the idea of steepening the backswing to the extreme; proposing the club shaft actually moves way beyond the almost vertical position at the top demonstrated by Westwood and Rose, to a point where the butt of the club is pointed way behind them from the down the line perspective.   According to Leadbetter the where swing should then flatten during the transition and downswing, mainly through a rotation of the left forearm (for the right hander).

I think the “A Swing” is too extreme.  Furthermore, this is not what the elite players are doing.  But if like the majority of recreational golfers you fall into the pattern of shallow to steep, the idea or feel of doing the opposite is a good place to start.  The first step is to get the club moving away from the ball without getting the head too far behind the hands.  There is a golf school in Knightsbridge who have explained this initial phase very well in the following video:

I actually went to see these guys on one occasion and they gave me an excellent little visual for getting the first part of the swing started on the right line.  Take your set up and place a club at a 45 degree angle between your feet.   Then you simply match up the two shafts as you swing the club back.   As demonstrated in the following image created by Mark Crossfield: 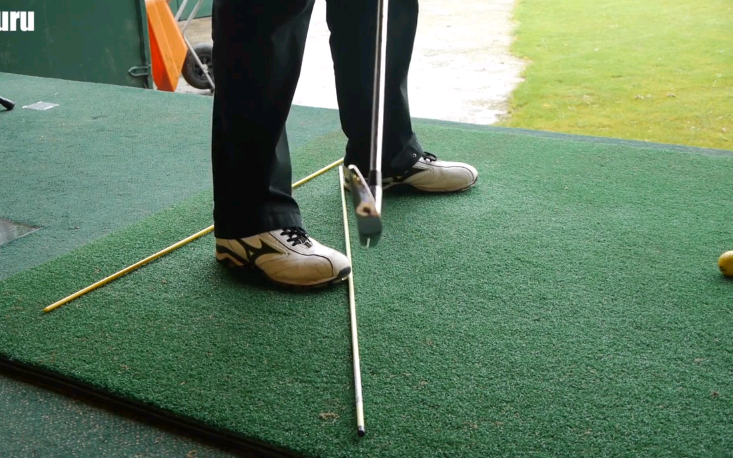